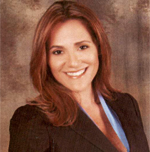 Ada B. Pozo is certified by The Florida Supreme Court as a Circuit Civil Mediator and as a Family Court Mediator.  Ada is fluent in Spanish and is available to conduct mediations in English and Spanish.

Ms. Pozo is a retired Miami Dade County Court Judge. During her term, she presided over thousands of cases in the civil, criminal, and domestic violence divisions. Ada was also certified by the Florida Supreme Court as a mentor judge, assisting and educating judges new to the bench.

Ada also served as a felony trial attorney with the Miami Dade County Public Defenders Office. Her experience as a judge, a trial attorney, and as a social worker make her exceptionally qualified as a Mediator to effectively listen, analyze, and resolve a wide range of cases.

Ada has also appeared on numerous television and radio programs as an expert legal analyst. She has also taught legal research at Florida International University and guest lectured at Nova Southeastern School of Law, and Miami-Dade Community College.